IRIS empowers over 400 accountants with vital MTD knowledge at Roadshows

More than 400 accountancy professionals flocked to our Making Tax Digital Roadshows on Wednesday and Thursday, hungry for knowledge on the upcoming HMRC changes.

Our team, joined by experts from HMRC, ran free-to-attend educational events in Waltham Abbey, Bristol (pictured below) and Leeds. 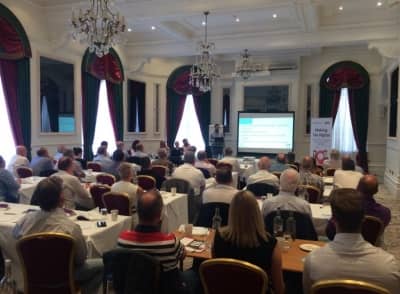 While a number of guests reported they have been preparing already and discussing the implications with clients, it was clear that for many, there was still confusion and misunderstanding. Some suggested they had been putting off their own preparation because they believe that MTD will not happen, with concerns that HMRC is unable to be ready in time for such a large scale IT project and switchover.

To show their commitment to MTD and explaining how it works, HMRC officials made themselves available to join our sessions. They spoke directly to attendees about what they need to do to comply with the changing regime. Rebecca Hutton and Mark Taylor presented HMRC’s plans and also fielded various questions from the audiences.

A feeling, expressed by some attendees, was that HMRC has not done enough to educate people about the coming changes. They also reflected views, conveyed online earlier this week, that HMRC has been shifting responsibility for promoting the reforms to accountants, rather than doing this itself. Some were disgruntled at the emphasis HMRC appeared to put on accountants and other ‘stakeholders’ to convey the reforms to clients themselves, after it gave them a ‘communications package’ to use in their own content and marketing activities.

Our tax expert Jenny Strudwick gave a presentation on what’s real and what isn’t, to dispel all of the myths that have sprung up around MTD. She explained the key elements of the reforms and what accountants need to work on.

The IRIS team emphasised that we have been ahead of the game since the biggest reforms in tax reporting in decades were first announced and that we’re here to help accountants through this huge change. They are not alone. To reassure any doubters, our Roadshow team showed accountants how we have been delivering elements of MTD since our October 2017 release, with our customers already using this functionality in the HMRC beta program.

With the focus on data capture, we demonstrated our mobile app Snap, detailing how it solves the age-old problem of clients with big bags of receipts. We also discussed the benefits of Kashflow and submitting and getting data from Excel and Xero into IRIS.

A snapshot of our new VAT filer product, ahead of its launch in October, was well received by guests who could see how simple it was and the benefits it could offer their practice.

No matter what the future of their practice, whether going fully digital or doing just enough to comply, our team stressed to accountants that they must focus on individual areas of their business.

There’s still a lot to think about with MTD but we’re here to help.

If you’re still not sure about the changes or want to discover more about how IRIS solutions can assist your practice, click HERE.

IRIS Company Secretarial allows you to stay compliant with all your company secretarial obligations.

IRIS Practice Dashboards give you an accurate, live reflection of how your business is performing at any moment. They replace the time-consuming task of manually inputting data into a spreadsheet with an instant graphical snapshot of your Key Performance Indicators (KPI’s).