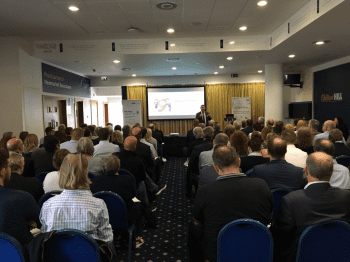 Our five roadshows, attended by about 700 accountants, unearthed many questions and concerns about MTD, revealing a hunger to learn but also a worrying lack of preparedness.

We’ve been touring the country, educating accountancy professionals about the radical reporting reforms and the sheer volume of interest, in itself, suggested how much work many have to do to comply in time. If you are feeling unprepared and uncertain don’t hesitate to get in touch today.

From Waltham Abbey to Bristol, Newmarket to Leeds, accountants from practices of various sizes poured in to hear from HMRC’s experts and our team.

Listening to the questions during and after the sessions, we could perceive a high level of anxiety about the changes coming in April among some, though responses were rather mixed, with others reporting that their clients were already all being served digitally.

At the end of the sessions, 45% of the delegates we surveyed told us they were not sure how they intend to make MTD for VAT submissions, while another 45% said they would do it from a bookkeeping solution. Some 10% answered that they would do it from the new IRIS VAT Filer. A clearer result was that 93% said they will make VAT submissions on behalf of their clients once MTD for VAT is introduced.

The IRIS team were surprised generally at how little some attendees seemed to know about MTD still, the lack of planning and that not many customers were aware or being communicated with.

Questions varied from the very basic – the what, when and why? Then there were lots of queries around APIs and how they work. Would it mean lots more data being sent to HMRC at transactional level? Did it mean HMRC could get access to our data?

These questions revealed security concerns around sending data to HMRC, where some people had clearly been given a misleading impression. So, for us, it was about reassuring them that, data wise, what they’re providing isn’t changing, it’s exactly the same, and no, HMRC can’t see their information.

Other questions surrounded who is impacted and details on exemptions. We believe that many of the bigger concerns of delegates were assuaged during the sessions.

We also held roadshows a year ago and the difference was clear – that delegates were a lot more accepting this year and wanted to find out more – as opposed to the anger some displayed last year about the fact the changes are happening. At the start of this summer’s series there was anger at HMRC, but this dissipated as the tour went on. Interestingly, 72% of survey respondents said they were not willing to join the HMRC VAT beta program.

Overall, it was good to see that these accountants have taken the first steps towards understanding and engaging with MTD. So, what next for them?

The message now is what we’ve already emphasised – that there’s not much time left. As we strongly advised on the day of the events, you need to take action now.

One of the positive first steps you can take is to set up the agent service account on the HMRC website. From a practice advisory point of view the takeaway was to say to accountants: Evaluate the business and decide how you want to tackle MTD. Do you see it as an opportunity? Will you just stay afloat or ride the MTD wave?

The big thing is simply just to stop putting it off. MTD is happening, whether we like it or not. The good news is that IRIS is here to help you and have different set of solutions for you and your client to be ready on time.

MTD takes effect in just six months. The time to act is now, so get in touch today.