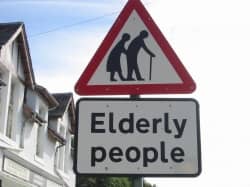 The Office for National Statistics has shown that the proportion of the UK population aged 65 and over is set to increase from 17% to 24% between 2010 and 2051.

In just over 40 years, the amount of people that are of State Pension Age (SPA) will increase as a proportion of the population and this is down to increasing life expectancy and a decrease in birth rates.

To make this a little easier to understand, a 65 year old man living in 1981 was expected on average to live until he was 79.

Another man, who has his 65th birthday in 2051 will be expected to live on average, until he is almost 91.

You can probably guess where this is going.

What this means is that the government will inevitably be forced to make tough decisions. David Sinclair from the International Longevity Centre UK (ILCUK) explains to the Financial Times:

“Tax revenue from those in work may fail to keep up with demand for social security and healthcare from an increasingly large proportion of people aged over 65 and out of work and who have poor health,” adds Mr Sinclair.

“This will force governments to make tough choices.”

One of the first moves that the government made to try and address the deficit that may be left in people’s pension savings was to introduce auto enrolment. This requires everyone that meets a certain criteria based on age and earnings to be automatically enrolled into a qualifying workplace pension scheme and have contributions paid into it from both the employer and the employee. This level of contribution will increase to a combined 8% by 2017.

There were fears however that the new “Pensions freedoms” that were introduced in the latest budget by the Government would undermine this legislation by allowing those aged 55 and over to access their pensions in a lump sum and do what they like with the money; not necessarily using it as a long term plan for retirement.

At IRIS we fully support auto enrolment and the IRIS AE Suite™ streamlines the process to enable you to comply with the legislation efficiently and effectively. The software automatically assesses your employees’ eligibility with each run of the payroll and then distributes payslips and P60s electronically. The IRIS AE Suite™ also publishes pension letters to the cloud for your employees to access easily and keeps them on record for auditing purposes.

Find out more about the IRIS AE Suite™ and even book a free demonstration to find out how you can streamline your auto enrolment process and stay compliant with the legislation, ensuring you are doing your bit to secure a positive retirement for your employees.

Book a free demo of the IRIS AE Suite™