With the scale of work involved with becoming compliant once the lease accounting changes come into effect, it’s imperative that your business continues finalising how it will manage the process.

More pressing, the time has arrived for preparation to begin in earnest.

After assessing your full lease portfolio and assessing what the impact on your balance sheet and other accounting practices will be, you need to compare full retrospective vs modified retrospective transition methods. Then, and only then, are you fully ready to start the transition to IFRS 16 compliance.

Reminder: the FASB will not permit the use of a fully retrospective application. IASB will accept both types of retrospective reporting.

An Overview Of The Two Lease Accounting Transition Methods

The IASB and FASB are both pursuing forms of retrospective reporting methods to facilitate easier compliance than a hard implementation to the new standards would. This is to avoid, or at least ease, the confusion which could arise from having to treat differently leases formed before and after a specific line-in-the-sand date.

A modified retrospective reporting approach is available too, for both IASB and FASB (though they are not the same or interchangeable). In essence, entities will be required to refer back until the date of initial application - as in, the first day of the annual reporting period in which the new lease accounting standards are being applied, rather than when the standards themselves were released.

Put another way, if you choose to begin implementing the new standards in October 2018 (because early implementation is allowed) and your financial year runs April to March; the modified retrospective report would go back to April 2018.

But make sure that you note this: the IASB permits early adoption of IFRS 16 as long as IFRS 15 ‘Revenue from Contracts with Customers’ has also been applied, but the FASB does not have this added caveat.

The Pros & Cons Of The Modified Retrospective Approach

This involves less retrospective reporting than the fully retrospective method. A company can instead record the cumulative effect of the new guidance on historic data and make an adjustment, as opposed to reissuing detailed account reports as though the new standards had been in place for the last couple of years.

The potential issue with choosing modified retrospective reporting as opposed to fully retrospective is that it will need to be completed during the year of transition. Plus other pieces of information need to be provided with a modified method submission.

This could put extra strain on resources at a time when they will already be stretched by the amount of work involved with becoming compliant. The rules of modified reporting are also complex to navigate which means you need persons well informed to ensure compliance.

In short, this method, in theory, requires less work (though perhaps more specialised) than the fully retrospective method but offers less information.

That’s why there are concerns from both boards that it could be open to misuse and allow deliberate vagueness and complexities in reports. It was allowed as an option in order to make managing the transition easier, not to offer the chance to mislead viewers. So who is to say that it won’t be ruled out in the future if that does happen?

The ins and outs of modified retrospective reporting are different when following respective IASB and FASB standards. Depending on which board you are reporting to, you will need to research this in more precise detail.

Innervision has produced a detailed explanation which is yours to download and keep:

The Pros & Cons Of The Fully Retrospective Method

First, this option cannot be used under FASB compliant reporting. It is not an option. FASB wants to achieve consistency of comparison instead, therefore only offers the modified option.

This is still a choice for those reporting under IASB standards.

This method allows for greater accuracy because the data included is more precise and presented in more detail. This is great for investors and potential buyers, and a lot closer to the desired goals which brought about this whole lease accounting change in the first place.

However, this method is potentially more time consuming than the modified route. Thanks, in large part, to the fact that it requires the use of historic lease data which some companies simply may not have.

This will be doubly difficult to collect, interpret and present for companies with large and widespread portfolios.

Don’t forget that all of this in depth retrospective reporting needs to be done at the same time as you or your team is also managing the lease portfolio and reporting going forward. In addition to other responsibilities. 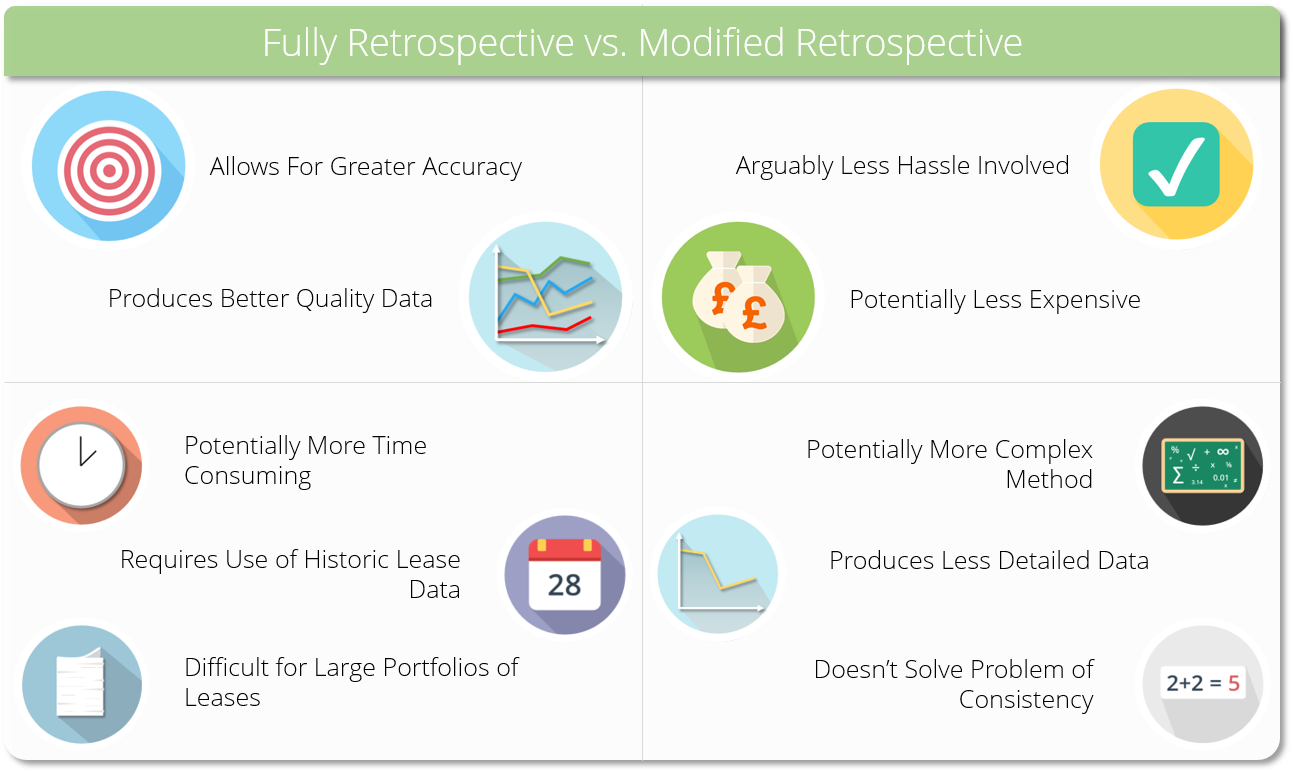 If you’d like to read more on lease accounting, here’s your free paper which goes into a lot more depth regarding the steps companies can take when transitioning to either IFRS 16 or FASB ASC 842.