On a chilly morning in early January, a team of 13 volunteers from the Stockton office kick-started the New Year by volunteering at Tanfield Railway, the world’s oldest railway, near Gateshead. They spent the day helping to move old sleepers that needed to be cleared after a new section of track had been laid between two stations.

Despite the cold, the weather held and everyone chipped in to load a whole two waggon’s worth of sleepers. This was a huge help to the railway who were most appreciative and complimentary about the IRIS volunteers, as the job would have taken the railway a lot longer without the boost from the number of people we had provided for the day.

This was the third giving back day that members for the Stockton team had spent helping out at Tanfield, with Jon Price first volunteering back in October 2014 and Claire Treadwell, Chris Malcolm and Jon Price also helped to put up Christmas decorations and repaint sections of the Santa’s Grotto, for the railways North Pole Express event, in the run up to Christmas.

IRIS offer all employees the chance to take three giving back days per year to volunteer on community projects. 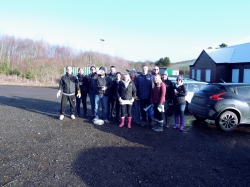 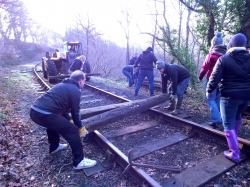