After a successful inauguration of the Manchester FoAE last month, the group were keen to kick on and tackle some of the more poignant issues that surround auto enrolment and encouraged a more relaxed, collaborative feel to the group. 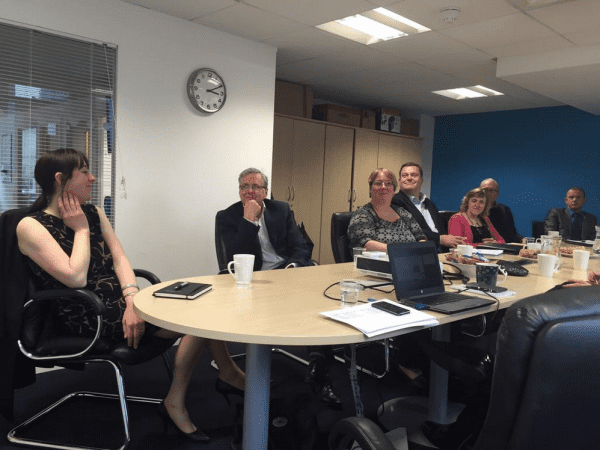 It was great to see a plethora of fresh faces attending. The event started with all of the members introducing themselves and sharing with others their auto enrolment journey. 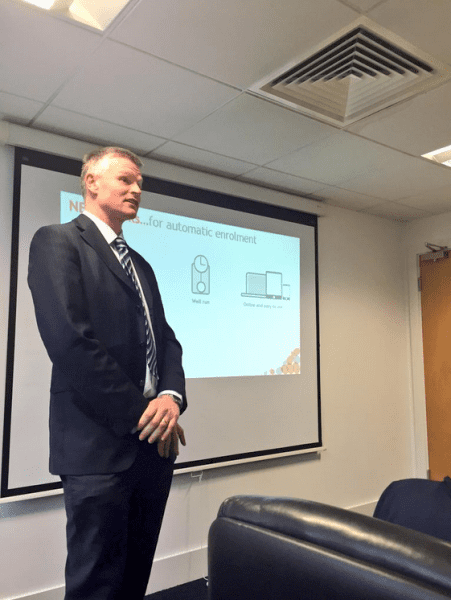 First speaker in the limelight was David Hilton from the government backed pension provider; NEST. The group were keen to hear views on auto enrolment from the perspective of a pension provider and David didn’t disappoint. He took the members through the service provided by NEST who are one of the only pension providers unable to refuse to take on new businesses by way of law. They were set up with auto enrolment in mind and their user interface is extremely user friendly.

David talked about NEST Connect and the opportunity it presented to payroll bureaus and accountants via an online hub. This allows pensions to be micro-managed by the advisers. 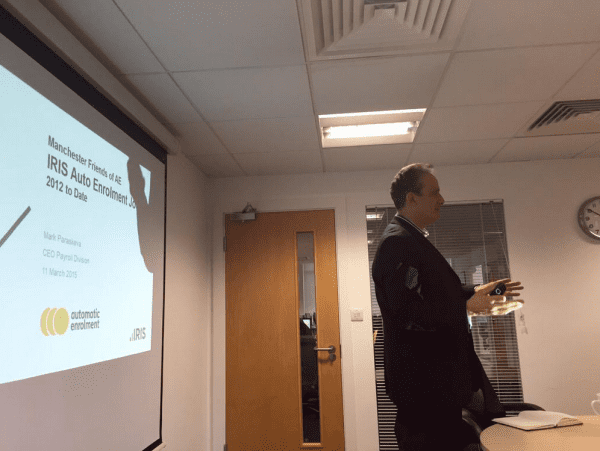 Up next to speak was our very own payroll division CEO; Mark Paraskeva to talk about our journey through auto enrolment as a software company. Mark explained that, we weren’t formed with an existing knowledge of auto enrolment. The workplace pension reform was thrust upon everyone with a very intimidatingly large piece of legislation and were told to get on with it.

This was where the journey for IRIS began and the members of the group were extremely grateful to hear this journey from the perspective of a payroll provider as it gave them a peace of mind that they really weren’t in it alone. Mark went on to explain how we had to be innovative and think of the legislation in a new light and process auto enrolment alongside payroll. This then lead to the development of the IRIS AE Suite™. 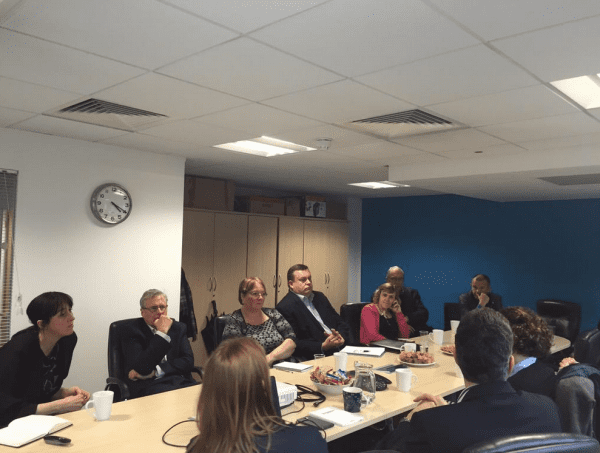 The group then went onto a discussion around their own journeys through auto enrolment and how far along in the process they were. On the day, not one of the businesses representatives in the room (apart from NEST and IRIS) said that their company had staged and found comfort in being able to chat to people in similar positions to themselves. The Friends of Auto Enrolment initiative is about bringing likeminded people together to talk about issues, to learn from those further along in the process and to hear insights from industry professionals.

Another topic that was discussed during the meeting was whether carers and contractual workers counted as employees and thus, should they be auto enrolled into a qualifying pension scheme? This is a topic that is still under debate and The Pensions Regulator (TPR) have recently released new guidance on auto enrolment for carers. You can read about this in our blog post from yesterday.

The Manchester Friends of Auto Enrolment group is always looking for new people to come and share the experience. You can join our group on LinkedIn to find out more details of what happens at each meeting and when the next meeting is scheduled. Joining and attending is completely free and you can even look to host the event! The next event is scheduled for 9th April (this may be subject to change due to Easter).